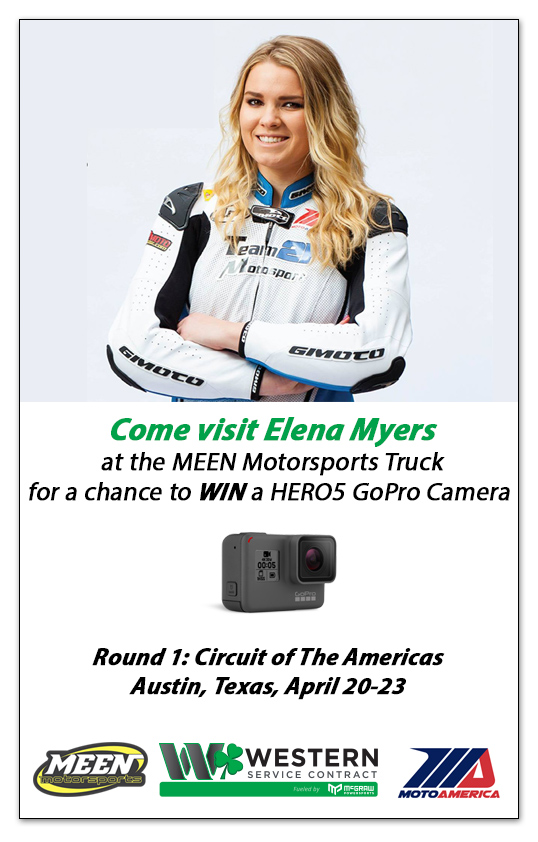 It’s that time of year again – MotoAmerica racing season! The series kicks off alongside MotoGP at Circuit of the Americas in Austin, Texas, on April 21-23. This is the series I raced in for six years, winning twice, so it will always hold a special place in my heart. This year, I’ll be attending most of the races as a representative of my employer, Western Service Contract fueled by McGraw Powersports.

I’ll be hanging around the paddock with the team we’re co-sponsoring with Meen Motorsports–Josh Herrin in Superbike and Bryce Prince in the Superstock 1000. I’ll be sharing info about the races and riders on this blog and on our social media channels.

For those of you who don’t have much knowledge of the American road racing circuit, this is for you. I want to help point you in the right direction so that you can follow the season with me and learn about the history of this series, what it’s become, and how it all works. Follow me . . .

From 1976 to 2014, the American Motorcycling Association (AMA) was the sanctioning body that ran America’s premier motorcycle road racing championship. They put on a series of races that run from spring to fall, traveling the country to race at many of the premiere venues in America. It’s the only professional road racing championship in the country, the nation’s pride and joy for road racing, and the one every young racer aspires to be a part of some day.

Other countries have their own similar series, and there is also World Superbike competition. In every one of these races, competitors ride highly modified production motorcycles on closed, paved courses. MotoGP is quite a bit different, as these riders race prototype machines that the general public doesn’t have access to.

In 2015, a new sanctioning body called MotoAmerica, led by former world champion, Wayne Rainey, took over with the goal of growing the sport. Since its inauguration, MotoAmerica has created some of the best racing that this country has ever seen, drawing an incredible number of riders from all over the world and providing America’s talent with a platform to prove themselves with the best of the best.

Who rides in these races? You must be licensed by the AMA as a professional rider, a status you can only achieve through training and proven skill as reflected by points earned at the amateur level.

To even become a racer at the amateur level, you need go through a new rider’s school. This teaches you race procedures and how to do a race start, among other things.

When I attended a new rider’s school in Portland, Oregon, we were also required to do six hours of volunteer work. I was 11 at the time, so my dad and I parked ourselves in turn one and assisted the flag marshals with their duties.

Once you’ve passed the new rider school, you become a novice racer. If you do well at that level, you get bumped up to expert. Once you’ve won some expert races on a 600cc or 1000cc sportbike, or placed well in an expert amateur championship, chances are you’ll be eligible to get your professional license, which is every young racer’s dream.

If a racer is coming from overseas to race here in America, they would need to have the same sort of qualifications from their country. On some occasions, riders from different disciplines, such as AMA Pro Flat Track, have been granted a professional road racing license based on the skills they possess and their proven ability to go fast on any motorcycle.

One of the best parts about professional road racing: If you can meet the qualifications, it’s one of the few sports in the world where men and women can compete against each other. Although women are certainly still a minority in the sport, women riders make up one of the fastest growing segments in the industry.

One of the most challenging parts: Motorcycle racing is expensive, and the purses are not even close to being able to cover your costs. Major expenses include travel and transport, staffing your team and maintaining your bike. Tires alone can add up to tens of thousands of dollars over the course of a season, since you get a new set for every race and most, if not all, practice sessions. One way this is addressed is by offering different classes of racing to make the sport more accessible financially, as well as to younger riders.

The KTM RC Cup, now in its third year, was designed as a spec class. That means everyone is riding an identical bike, in this case the KTM RC 390 street bike. This class allows young racers age 14 to 22 to showcase their abilities in front of the country’s best teams and sponsors and to see what this pro racing stuff is all about.

Typically, these racers are funded by local dealerships or smaller motorcycle related companies, and sometimes mom and dad. KTM provides a lot of mechanical services normally provided staff they have on hand, so it’s an opportunity to race at a high level, but at a much lower cost than that of a Supersport or Superbike team.

The KTM RC Cup won’t be at the opening MotoAmerica/MotoGP weekend in Texas due to a very tight schedule, but they will be present at the other nine venues this season.

600 Superstock is one of two 600cc classes, also for riders who are on a bit of a tighter budget. Racers ride production-based motorcycles–either 600cc four-cylinders like the Yamaha YZF-R6, or 675cc three cylinders such as the Triumph Daytona 675. Allowed modifications are more limited than in its sister class, Supersport.

Riders you’ll see mostly in this class are either 16-20 year olds who are just joining the professional rankings, or racers who are looking to participate in the series without spending heaps of money.

Supersport is the other 600 class, and the racers here are some of the best 600 riders in the world. The grid is filled with past 600 Superstock champions and race winners who have graduated up, as well as racers from other countries and sometimes even from the higher classes like 1000 Superstock or Superbike.

Supersport machines are substantially modified production 600s or 675s. This class is quite a bit more expensive to ride in since modifications include engine builds and things of that nature. Everyone is allowed the same mods so the machines are quite close to even, unless the team doesn’t have the funding to make all those upgrades.

Superstock 1000, like Superstock 600, is a lower budget way to go racing, but on a bigger bike–either a 1000cc four-cylinder or a 1200cc two-cylinder machine. There are limited modifications you can make in comparison to Superbike. Competitors in this class have generally been professional riders for at least a few years and have moved up from one of the 600 classes, or possibly come from a similar class overseas.

Superbike, the premier class, has a grid full of the best racers in the country riding on the best machines in this country. Like me, some of the racers here skip over the Superstock 1000 class and go straight to Superbike. The top racers in this class could easily–and many have–compete at the world level and do well.

The bikes built by the factory teams with financial support from the manufacturer are a far cry from the standard bike you can buy. They have the best of everything, including electronics, suspension, brakes, engines, wheels, and more.

When I competed in Superbike in 2015, I was on a Suzuki GSX-R1000. Modifications such as lighter wheels allowed me to steer the bike a bit more easily, thus making the step-up to the big bike a bit easier.

For 2017, MotoAmerica will be hosting 10 race rounds that will all count towards each of the five championships. They are spread throughout the country, from New Jersey to California, with stops everywhere in between. These tracks will be familiar to everyone who has been racing in the states, as amateur races are held at several of these circuits, and some even have their own championships.

Each race weekend typically runs from Thursday to Sunday. These are long weekends and require great physical fitness and stamina from all racers. Thursday is set-up day. Friday is dedicated to practice on the track, and the first rounds of qualifying. Saturday’s morning session determines the starting grid. The first race is that afternoon and Sunday is race day, all day.

Races start at the Circuit of the Americas in Austin, Texas on April 21. The series finishes at Barber Motorsports Park in Birmingham, Alabama the weekend of September 15-17.

In the next blog, I’ll be breaking down the season so you know where the series is going, where you can watch it, and who to keep an eye out for. It’s gonna be a great season, and I can’t wait to share it with you.